The exhibition Repetition is the third in the series of exhibitions that address the issues of the creation and production of artworks and the value of positioning them within the art system. The first of these exhibitions, Setup Attempt, was on display in the Alkatraz Gallery in May 2021. This exhibition treated paintings as props, shifting the focus from the artworks to their frames, pedestals, reproductions and other approaches that make us believe a certain work is a work of art. In the same month the group exhibition The Next 21 Days will be Crucial was opened in the Škuc Gallery. At this exhibition I presented 3 pages from my Portfolio (as a work of art) that I usually use to apply for various grants and similar needs. I treated my artistic portfolio as a stock that could be used to trade on the art system’s stock exchange. At this one has to wonder whether the way in which the artist presents him or herself to the public has become more important than the artwork itself.

Repetition is one of the strategies for promoting a work of art. In the previously mentioned exhibitions, repetition could be understood as media transfer or the reproduction of paintings. However, it is even more important for the work of art to be shown time and time again, that it appears in referential exhibitions and galleries, that it is reviewed and written about. Of course, it is important to note that not a single repetition is the same and even though the work appears to be identical, it is altered by each repetition, as an artwork is labelled as such (or not) by its context. The discourse helps place the artwork into the broader historical context, making it a referential point for the new generations. If a work of art is taken from its context, it gradually begins to fade from existence. 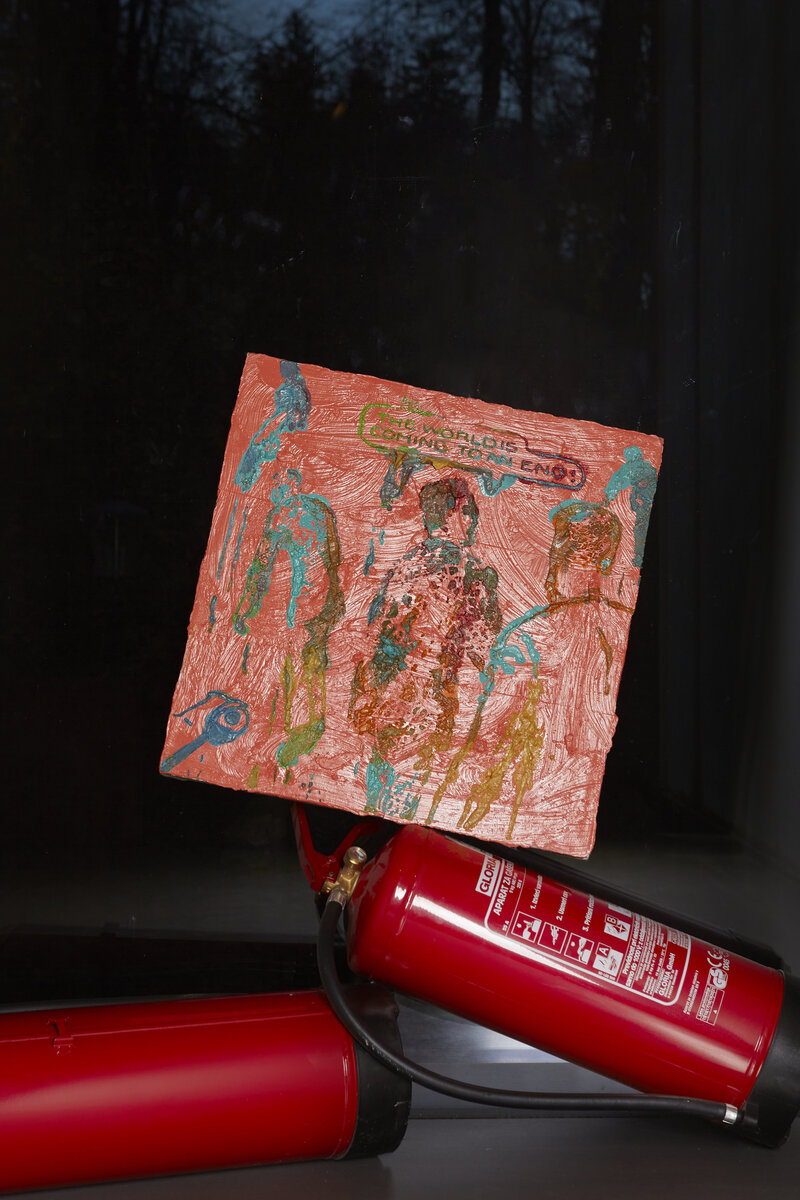 In the series Pure Speculation, I address the following question: what exactly establishes a work of art within contemporary political, economic and technological parameters. This topic is just as characteristic for my past works; it pertains to the relation between humans and technology and addresses the issues of the production of artworks in the 21st century. Painting (or the painting) remains the starting point in my practice, however, the emphasis has been diverted to frames, pedestals, reproductions and other strategies which enact a certain piece as a work of art.

Within this framework, the main subject in question is the aura of the artwork. McKenzie Wark’s statement that an artwork is actually a derivative[1] hit close to the mark. Artistic reproduction makes a work (in contrast to a copy thereof) unique, while concurrently promoting it and spreading the idea of its importance. The way in which art is presented seems very much akin to the stock market. On one hand, there is a myriad of artist portfolios with their countless ideas, while on the other, there are experts and institutions that speculate about them and thereby decide on further developments and investments. Thus, a portfolio itself becomes a stock that the artist, collector, or institution operates with. It seems that what is more important than an art piece per se, are the systems that recognise a certain work as art and furthermore promote it as such. The neoliberal structure of society has introduced a specific situation: art competes for its own existence with its double [doppelgänger] – the entertainment industry. This is a battle between the various ideologies that make use of the same methods and tools; however, the final result is essentially different.

Next in order, yet no less important, are the questions of authorship and originality of the work. In the 20th century, mechanisms such as appropriation, collage and transferring images between media have radically changed our ideas of art. After all, a tool itself (e.g. a paint brush) defines the final appearance of an art piece. Furthermore, we have reached a step further: the appearance and presentation possibilities of the works are co-designed by computer programmes and smart tools, which are created by corporations and/or collectives. The notion of authorship may appear clear (e.g. the artist's signature on his work), but is in fact much more arbitrary and multifaceted than it seems at first glance.

The artworks within Pure Speculation have a dual role. Considered individually, they are best described as the ‘still life of images’. They represent the ephemeral, mass-produced images (also short texts, slogans, etc.) found on the internet, in magazines and elsewhere. Employing processes such as appropriation and media transfer, I constrain these fleeting images onto the painting support. Firstly, I inspect the imaginarium which occupies our collective swarm of the visuals. Secondly, I scrutinise our perception of the visual in regard to the myriad of contexts in which such motifs occur. Furthermore, the artworks live another existence; they can be compared to props. Depending on the specific context it was pushed in, each work acquires a particular meaning. As artists we often find ourselves in precarious, flexible roles of the art market, while these works are similarly elastic and responsive to the given circumstances. 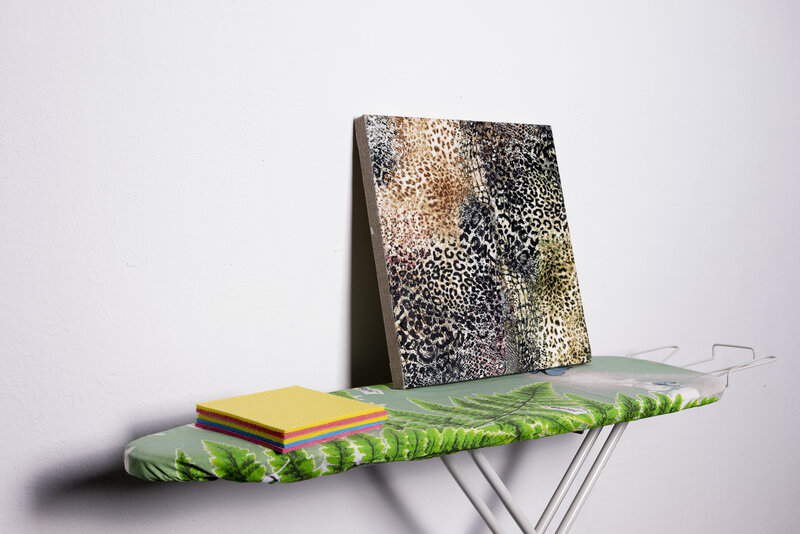 Adrijan Praznik (1988, Ljubljana) graduated in painting from the Academy of Fine Arts and Design at the University of Ljubljana. In 2017 and 2018 he attended The World of Art – School for Curatorial Practices and Critical Writing. His works were presented in numerous (86) group and solo exhibitions in Slovenia and abroad. He works as the artistic director of the Simulaker Gallery in Novo mesto, set up within the organization LokalPatriot, which is a partner organization of the project konS, within which he works as a curator and producer. He has worked as a curator and/or producer with artists and artist groups such as P L A T E AU R E S I D U E, BridA/Tom Kerševan, Sendi Mango, Jurij Pavlica, Goran Bertok, Uroš Weinberger, FaceOrFactory/Eva Smrekar and Aljaž Rudolf, Nejc Trampuž, Barbara Drev and numerous others. In 2015 and 2019 he was awarded with the grant for promising artists from the Slovenian Ministry of Culture. In 2019, he presented his work as a part of the Time Without Innocence. Recent Painting in Slovenia exhibition curated by dr. Martina Vovk at the Museum of Modern Art in Ljubljana. In May 2021, he had his own solo exhibition Setup Attempt at the Alkatraz Gallery in Ljubljana and participated in the group exhibition The Next 21 Days will be Crucial at the Ljubljana Škuc Gallery. In January 2020, he was awarded a living atelier in MGLC Švicarija.

We wish to thank the following individuals for help with realizing the project: Vesna Bukovec, Simon Gmajner, Ana Grobler, Miha Kelemina, Sebastian Krawczyk, Teja Kosi, Lovrenc Košenina, Mia Paller, and Lara Plavčak. We would also like to thank the following organizations: International Centre of Graphic Arts (Švicarija), KUD Mreža/Alkatraz Gallery, the World of Art – School for Curatorial Practices and Critical Writing, and the Kersnikova Institute. Special thanks goes to Klemen Ilovar for his creative input and engagement.

INFO. ABOUT THE REPRODUCTIONS